When I was a kid, I thought “white Christmas” had something to do with white people, like how picture-perfect it was. Snow on Christmas, or in general, was just something so vague and abstract to me, something you see only in movies and TV. I also thought the intricate snowflake shapes you’d cut out in class were a total invention, and actual snow just shapeless specks. I’ve learned my lesson since then, since I have seen snow and experienced actual cold temperatures, but not like this, not in Hokkaido, Japan’s northernmost island! 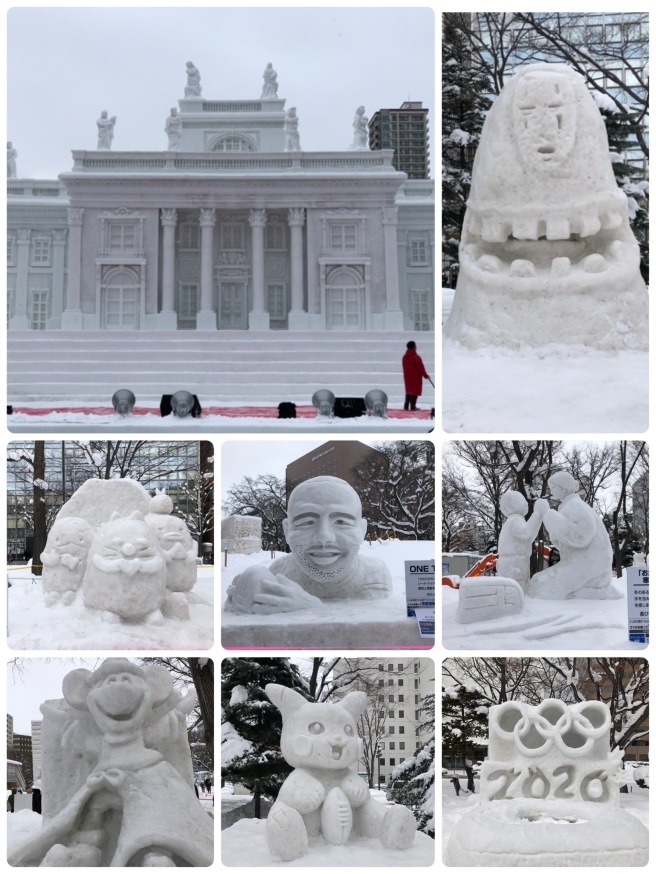 This last weekend, temperatures had ranged from 30° F (-1° C) at the highest to 1° F (-20° C) at the lowest. Wow! In Fahrenheit, for those who don’t think about it much, water freezes at a sensible 32°. So imagine seeing temperatures almost near 0° F! There were snow sculptures really ALL over the city, and even surrounding cities that I went to, but the main attraction was the ones featured at the Sapporo Snow Festival, spanning perhaps six city blocks along Odori Park in the center of the city.

There were also gigantic snow mural walls, and at night they’d do a project mapping and light show. Neat!

Ice sculptures abounded too, and by morning time the nighttime snowfall lent them incredibly A E S T H E T I C accents of frost.

While the snow festival was the main reason I took the two-hour flight north to Hokkaido, other highlights included:

An intimate jazz concert in Susukino featuring Mori Yamato, voted the best young guitarist in the WORLD for the year 2019.

The Sapporo Beer Museum, situated inside a beautiful 19th-century brick warehouse with vintage Sapporo ads dating all the way back to the company’s inception in the late 1800s, exhibits of the vats, equipment, and the story of how they brought Western brewing techniques to Japan, guided tours, and of course beer tasting. In Hokkaido you can buy “Sapporo Classic,” based on the original brew and sold only in Hokkaido, while of course you can buy the regular Sapporo Draft anywhere in Japan.

I also spent some time in Otaru, famed for being the best place in Hokkaido for sushi, a prefecture that already in itself is famous for having some of the best seafood in Japan.

Sapporo also has quite a lively nightlife, especially in Susukino, just a stone’s throw away from the festival in Odori Park. I found a place, Gossip Lounge, where the cover charge also included FIVE drinks, and for just another $1 you could increase that amount to ten. Not only that, but for the first time ever, I actually found a few places that would amazingly let foreigners in for free (but not others), to varying results of atmospheres. Just as in Fukuoka or Osaka, Hokkaidans were incredibly friendly and welcoming. And you know, for a city where the temperatures got to -20, at the same time you could hardly have expected to feel so warm.

One thought on “Hokkaido & The Sapporo Snow Festival”