Since I’m here a second year, I also got to experience my second undōtaikai, or Sports Day, which, by far, has been my favorite Japanese high school tradition I’ve experienced. From the students marching in to military cadence, to 40-student dance routines choreographed completely amongst themselves, it’s an entire day filled with spectacle, fun, aesthetic, and of course sports. I’m also glad that I can finally give it proper justice, as ours occurred just less than a week ago while last year’s post had been written nearly two weeks after the fact.

Sports Day kicks off around 9 AM with the student council members marching onto the track with the flags of Japan, of Hyogo prefecture, and of the school itself. The entire school is divided into four teams– for us, it was red, yellow, white, and blue, and each team is made up of at least one or two classes from each of the three grades. They all, of course, sport matching bandanas and flags made by the classes themselves. Everyone lines up in formation, and the principal opens the event with a speech. We all rise for the national anthem as the same three flags from earlier are raised on their poles.

Following that is rajio taisō, or radio calisthenics, all done in unison. It’s to this exact track and this exact sequence, of a man counting with some classical-sounding piano music in the background. You’ll find that military discipline will be a common theme running throughout the event– and speaking of running, there will be a LOT of relay races throughout the day. I still have no idea whatsoever how the brackets work, how points are calculated, or in fact, anything at all about this event that I’m supposed to be explaining to you. I just know there’s a lot of moving around involved.

The first few events are regular baton-passing relay races. There’s also mixed relay where for the first 50 meters, they have to skip rope while running, for the next crawl under a net, carry a heavy sandbag, and finally link up with five other students for an epic six-legged race finale. There’s also teachers versus students, which I got to run 50 meters in. I was told that it would be at 3 PM, but when I went to the bathroom around 2ish PM a teacher came running up to me to tell me that the schedule has suddenly changed and I have to run NOW. I was passed the baton pretty much as soon as I got to the track– it sums up what it’s like to be a JET/ALT pretty well, in that last-minute changes and heads-ups will be the bane of your professional life. In fact, the official motto of the Japanese school-ALT relations is “Haha WHOOPS!”

Before lunch is the dance competition, for which the third-years from each team has prepared their own choreographies to their own chosen playlists, performed in their own chosen matching outfits. I thought red was the clear winner, and naturally I was so mesmerized I didn’t take any pictures or videos of it. The music is usually a mix of J-pop and American pop, though re: Western music I feel like Japan is just around a decade behind. Bruno Mars’s “Marry You” showed up twice. And nightclubs here still play “Shots” by LMFAO really often.

Anyways, now it’s lunch time. On special school-wide event days like this, the school will have bento lunches delivered to the office. So here’s what a typical, but also slightly fancier, school lunch looks like. Tempura and rice, just arranged more aesthetically than usual.

After lunch, each of the club activities (sports) teams march onto the track in their uniform, from aikido to basketball to kendo to table tennis. The sports teams also competed against each other in relays, in uniform. Track & field obviously won, although soccer did sometimes come close. The worst runners were the martial artists, but that was mostly due to their uniforms. Since they were so clearly last in every race, they would put on a little demonstration after each lap, like flipping their teammate over with a judo throw as a way of passing off the baton. Pretty cool.

After putting to rest the age-old debate of whether track & field kids really can run fast, the students then change back to their regular PE clothes and now the non-relay stuff (interspersed with more relays) begin!

Tug-of-war with ship’s rope. The team that manages to knock the flag down toward their side is the winner. This one’s one of the few co-ed events. 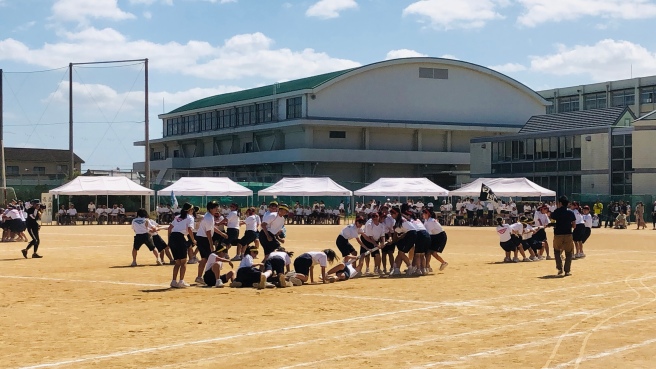 For some reason a girls’-only event, it’s the return of tug-of-pole. Nine large metal poles lie in the middle of the field. When the starting pistol fires, two teams run onto the field and fight each other over them. Once a pole is taken past their own team’s side/endzone, the people who won that pole are free to run back onto the field to help with the stealing of another. This would have been even more badass if they somehow combined it with kendo, or maybe incorporating land mines and robots in some way. 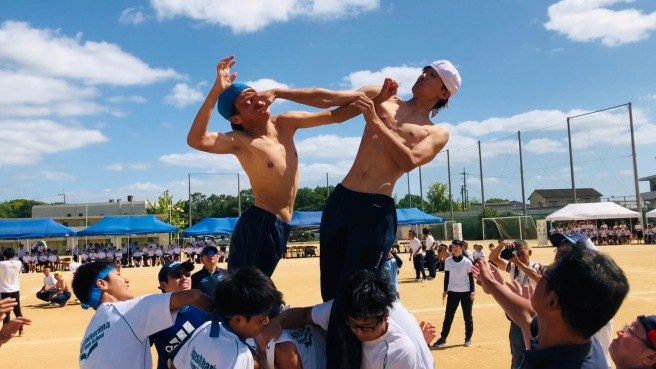 Kiba-sen (cavalry fight), which I had mentioned before, but now I have slightly better pictures. Three boys form a horse, one sits atop as a rider, and he either wants to knock his opponent off his horse, push his horse out of bounds, or snatch his opponent’s hat off inside a very small (maybe 6 feet/2 meters across) circular ring. Teachers stand all around to catch anyone in case they fall. Besides running in the teacher’s relay, it was the only other time I felt like I was actually part of the event. Everything looks so fun you can’t help but want to participate in all of it.

There is no grand finale, really. The final event is the final relay race. But again, I have no idea how the heck the whole thing works. Every team participated in every event; it didn’t look like there was any elimination, and I noticed the same students doing multiple events regardless of whether they had won or lost the previous ones. During the ending ceremony, during which all teams line up again in formation, and sit on the field, the student council announced the team winner of each single individual event. There were so many winner announcements that I really, truly, have no idea who actually won overall. I know, this is not Sports’ Day’s fault. I just don’t speak Japanese. It probably is an accumulated-points system. Either way, I asked the next day and it turns out white team won. Nice!