Japanese train stations are massive. Some are so big, that it could take you a full half hour to walk from one end to the next. Many have stores, restaurants, and even markets. You could buy dinner for the day, a book to read on your next train, and hell, even an outfit for the day before even exiting the station gates. Tokyo Station is no exception. It serves over 450,000 people a day, more than the entire population of Iceland. Featuring stunning early 20th century architecture, what you see is in reality a restoration only six years old, a return to form after the station had been damaged by Allied bombing in 1945 and never quite the same thereafter.

As a side-note, it is interesting to be in places with such connections to history, to be somewhere that had actually been bombed just a generation ago. Interesting fact– Japan did manage to bomb the US exactly one time, in a failed attempt to start forest fires in Oregon in 1942. The story of that, and pilot Nobuo Fujita’s attempt to atone for what he did, of a man prepared to commit suicide in case the residents of Oregon would not forgive him (spoiler: they did), is a heart-warming read. 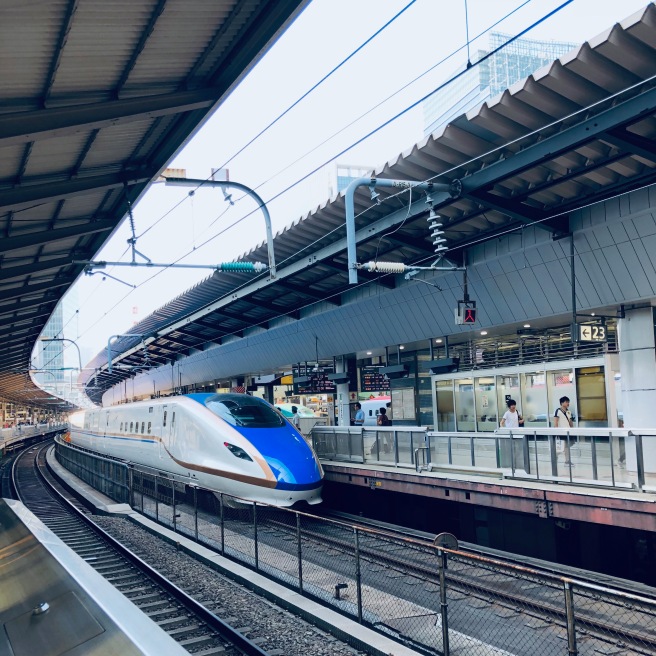 Anyways, Tokyo Station is the terminus of many a Shinkansen ride, i.e. the famed Japanese bullet train. It covers the 300-mile/500-kilometer distance from Osaka in a breathtaking 2.5 hours, which makes for an average speed of 120 miles an hour (193 km/h). That’s roughly the distance between Los Angeles and San Francisco! One of the highlights of this sprint to Tokyo is passing by Mount Fuji:

Upon arrival, you find out yet another cool thing: that the station is directly across from the freaking Imperial Palace of Japan, the residence of Emperor Akihito himself.

The actual Imperial Palace grounds are open only on special occasions, for example on the Emperor’s birthday, and unfortunately we happened to come on a day that it was neither. In fact, it was pretty much surrounded by policemen, who incredibly are still armed with…

I’d say it’s either a testament to how safe Japan is, or perhaps how, in a lot of ways, Japan is still pretty old-fashioned. The police sport 5-shot, .38 special revolvers, much like how American cops did up until the late 1980s. Either way, I think it’s awesome.

The palace perimeter was closed off, so the farthest we could get in was the avenue of trees at the top of this section. Despite this, where else in the world would a quick train ride and hop across the station take you so close to the country’s most eminent person?